According to the instructions 'The first step is to drill the four dimples in the footplate with a 1mm drill bit' (to locate the roof supports) and this I eventually did after an hour of rummaging in boxes and muttering expletives… Knowing that I have a set of micro drill bits is not the same as knowing where it is! 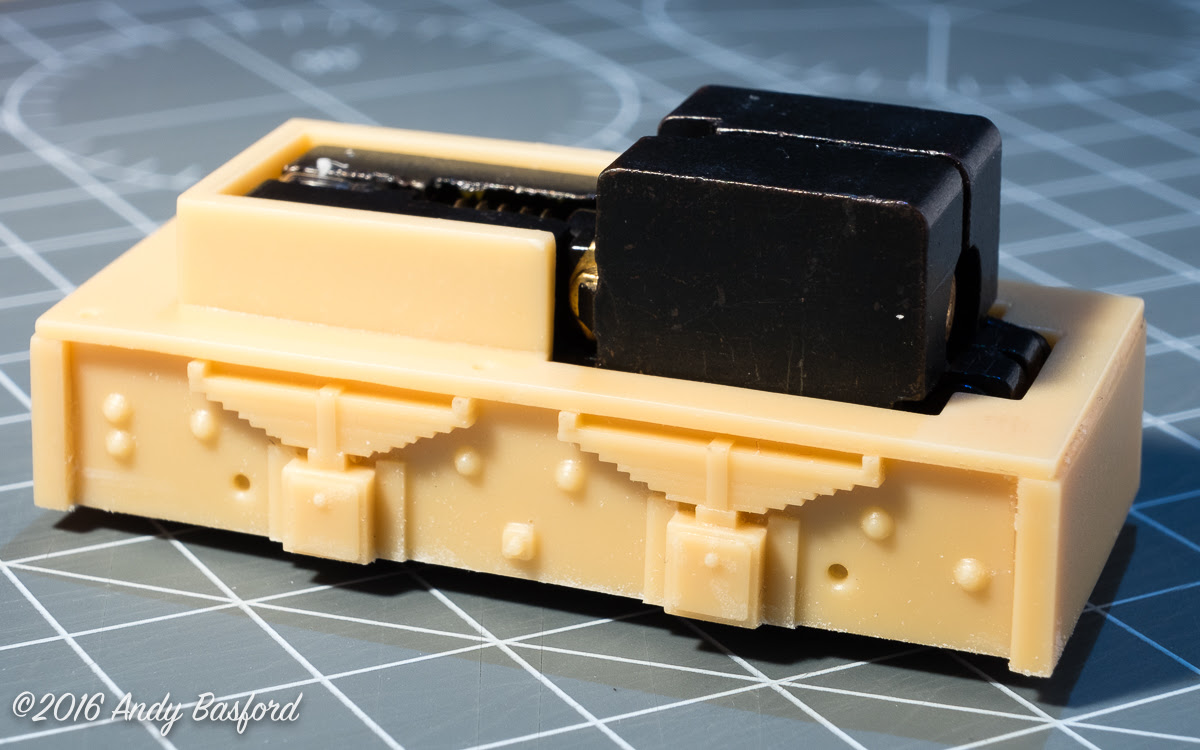 In June I joined (re-joined actually) the 7mm Narrow Gauge Association (7mmNGA) at their annual exhibition in Burton-upon-Trent and purchased a copy of the society's 'Going Minimum Gauge' handbook.

A wooden flat wagon is one of the modelling ideas… Using a Peco N gauge wagon chassis and a handful of those wooden coffee stirrers that every railway modeller I know squirrels away by the handful.

Given that my 'Project no.1' will need something to pull and that my box of potentially useful bits and pieces contains both a suitable chassis and numerous coffee stirrers I'm going to build one, something along these lines… 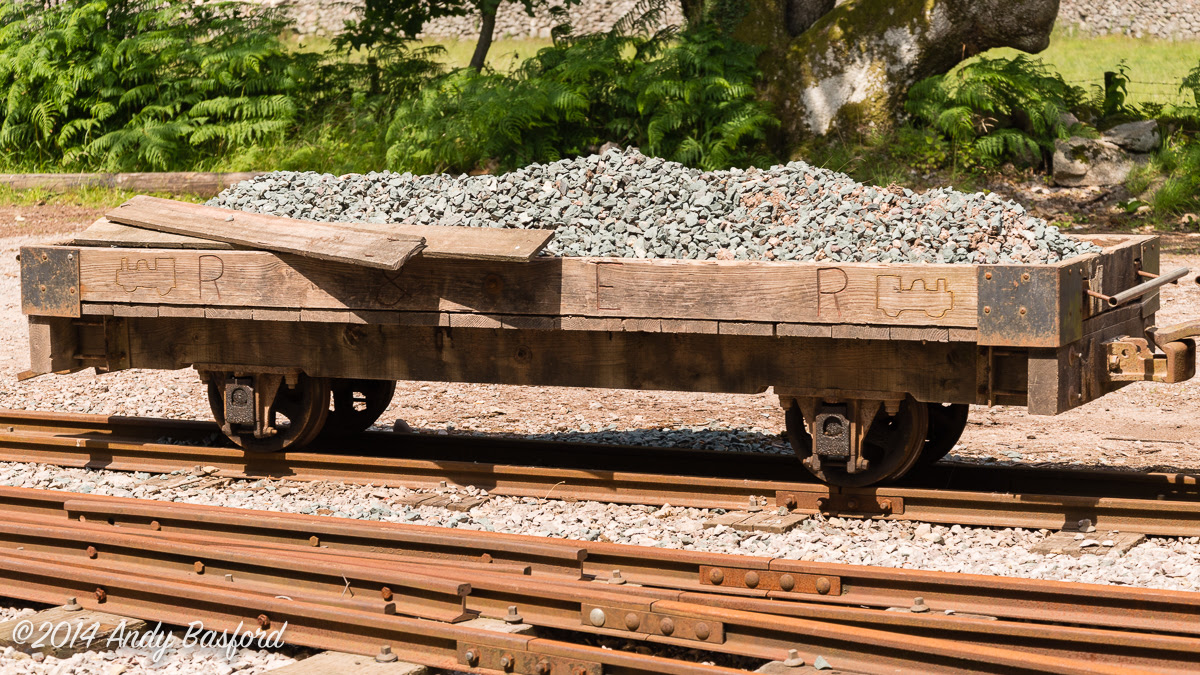 This is one of nine four-wheeled wagons used by the Ravenglass & Eskdale Railway's permanent way department. Eight of the wagons have removable bodies (tops) for ballast carrying (as seen above).

Remember, remember! The fifth of November…

With tonight being 'Guy Fawkes Night' (Guy Fawkes, the last man to go into the Houses of Parliament with good intentions? Discuss…) I thought I'd post a photo of something I saw at the Bala Lake Railway a couple of years ago… 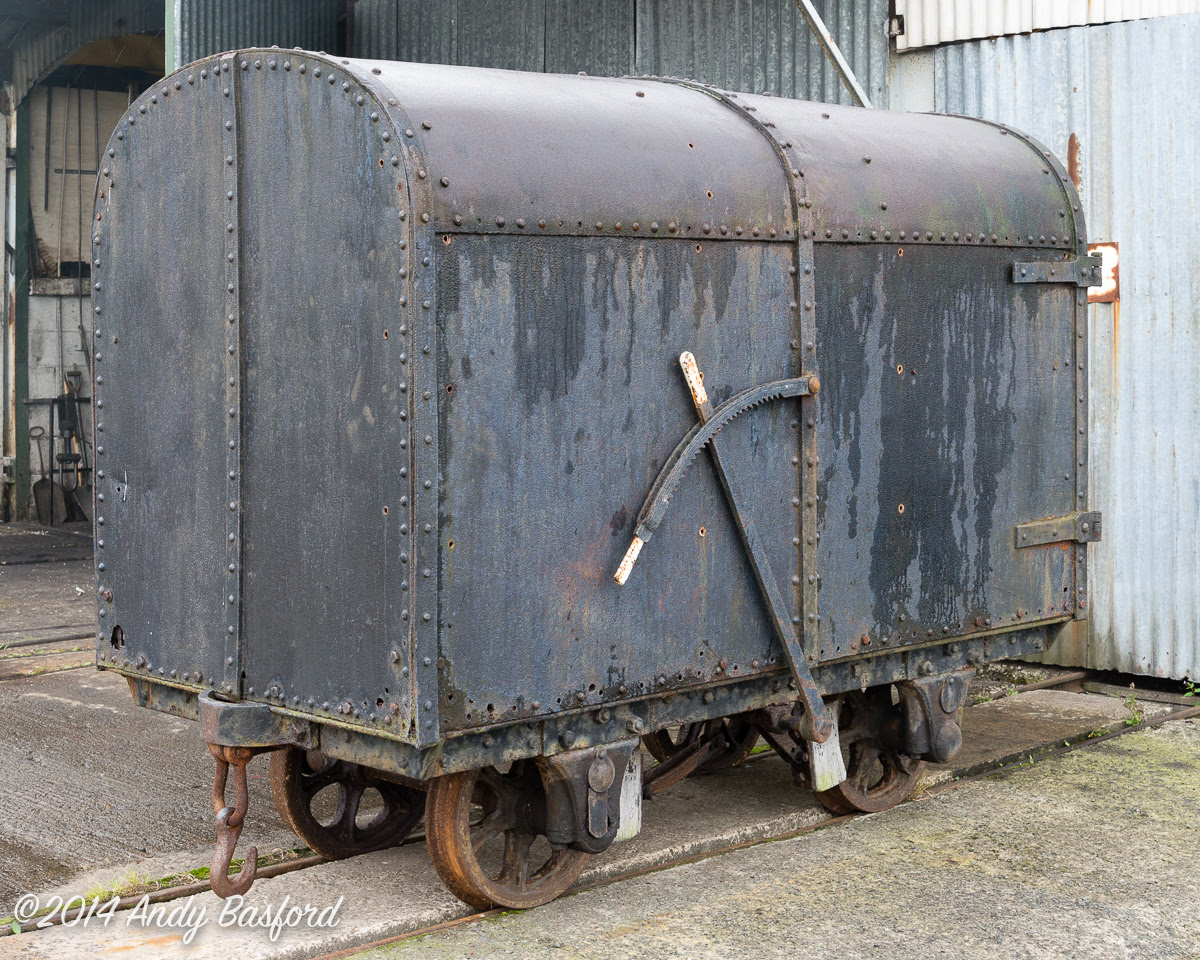 This 2ft gauge gunpowder wagon was originally used for transporting explosives around the Oakeley Quarry in Blaenau Ffestiniog when blasting for slate and had arrived from the Llanberis Lake Railway for restoration a few months previously.

Despite constant disputes over the rates for slate shipment the Oakeley Quarry sent slate over the Ffestiniog Railway until the railway closed in August 1946 but also had a connection to the London & North Western Railway exchange yard in Blaenau Ffestiniog (via an incline built in 1930) and large tonnages of slate were sent out via this connection until the closure of the quarry in 1970.

This will hopefully become the first loco for an O-9 (7mm scale, 9mm gauge) layout that's currently in the planning stages. It's a simple enough looking kit but given my ham-fisted nature I'm sure that it's still possible for me to muck it up! 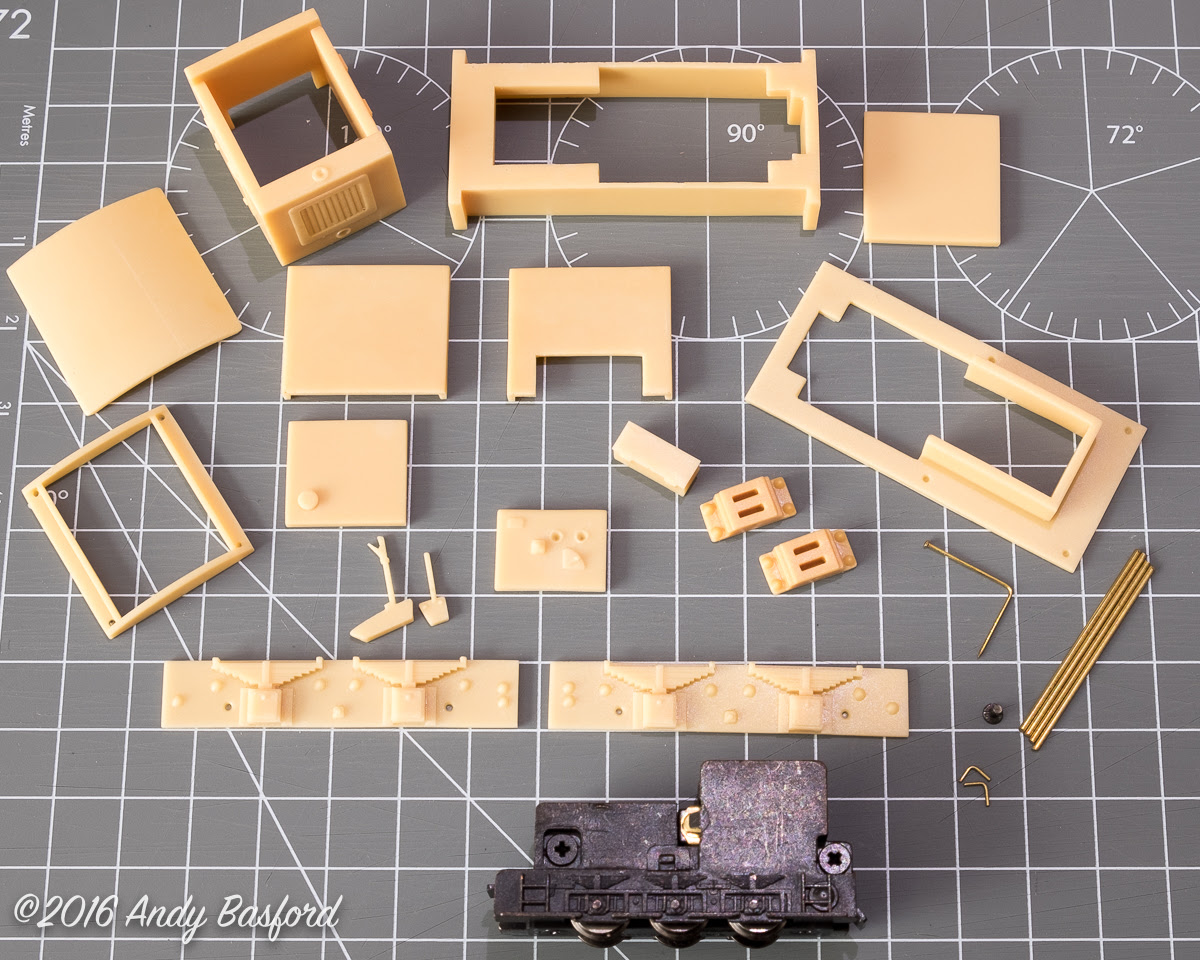 Power will come from an N gauge Bachmann Plymouth Diesel Switcher chassis 'which is very simple to convert to a four wheeler' (according to the kit's instructions… I won't be bothering with this, the extra pair of wheels will barely be visible…)

Expo Narrow Gauge (ExpoNG) is billed as 'Europe's Premier Narrow Gauge Modelling Show' and having made my first visit to this long-running event last weekend I can easily believe the claim!

As I'm rather partial to 'micro layouts' the annual 'Dave Brewer Challenge' (named in honour of the late chairman of the Greenwich and District Narrow Gauge Railway Society, organisers of ExpoNG) was of particular interest to me this year with the theme being 'a small, working layout based this time on a point and three lengths of track' and I began by visiting stand 61 where the entries were on display. 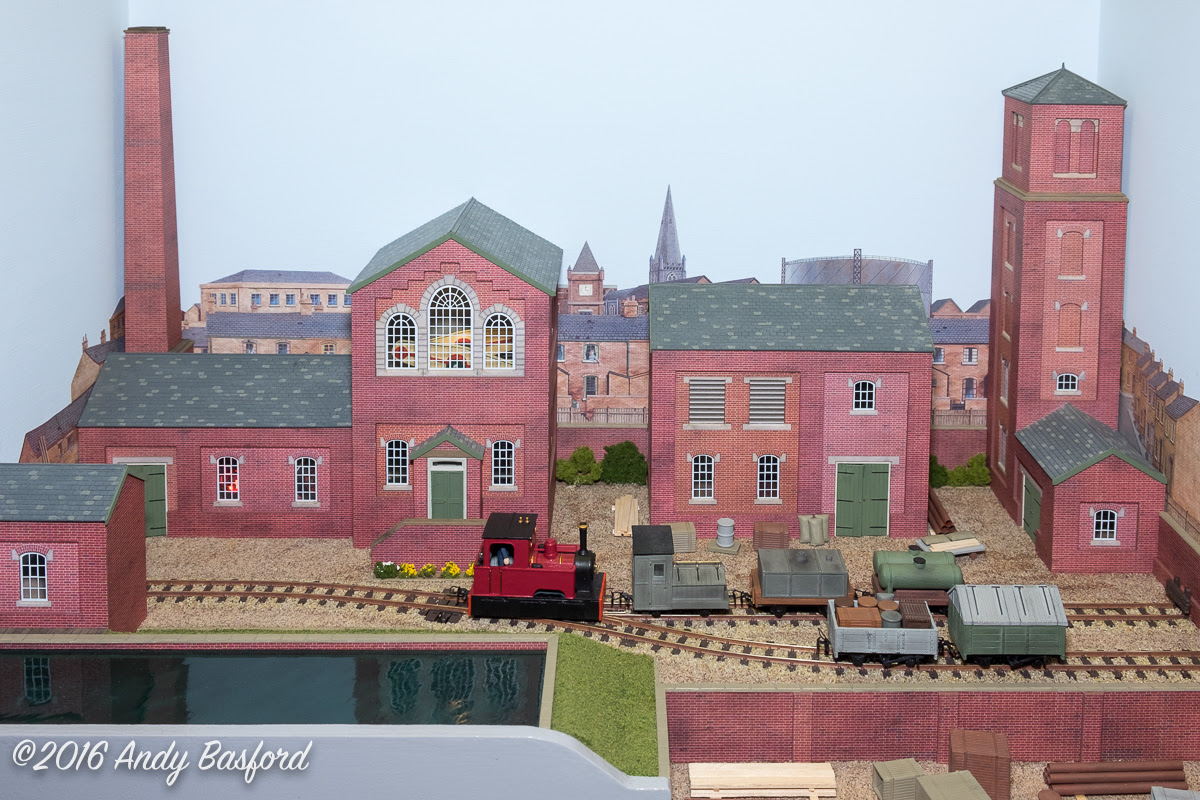 'Priory Waterworks' is a very neat shunting puzzle, with wagons being sorted into order according to a set of shuffled cards. The layout also features a working beam engine, just visible through the large windows on the left hand building. 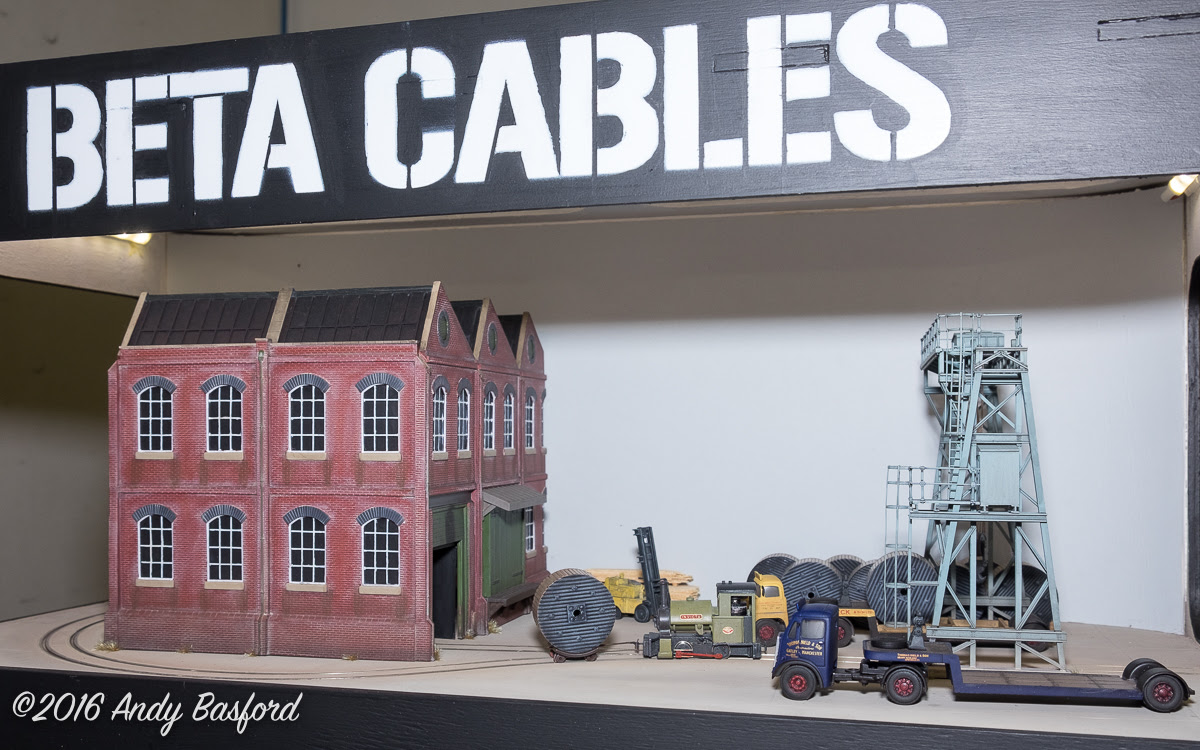 'Beta Cables' is based on the 3ft 6in gauge system at the British Insulated Callender's Cables (BICC) site at Erith, Kent and is built to a prototypical but unusual (for a 4mm scale layout) 14mm gauge. Empty cable drums are exchanged for full inside the building, the full ones being carried on special cradles as seen below. 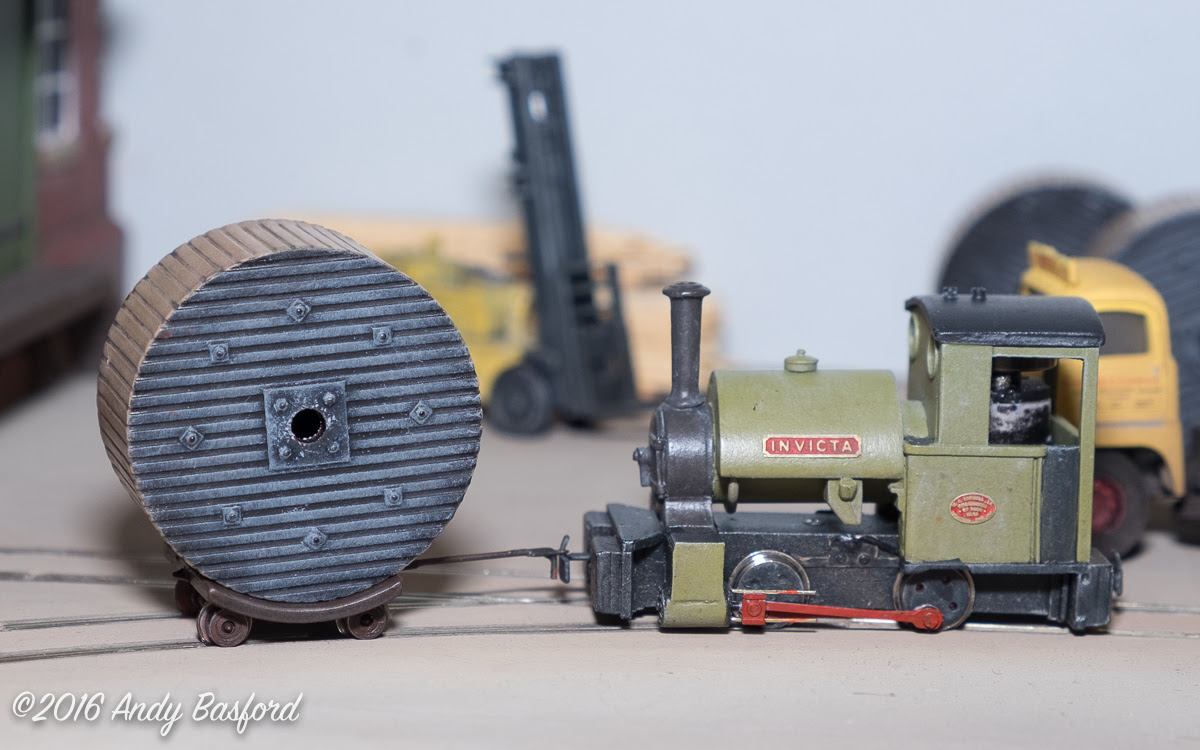 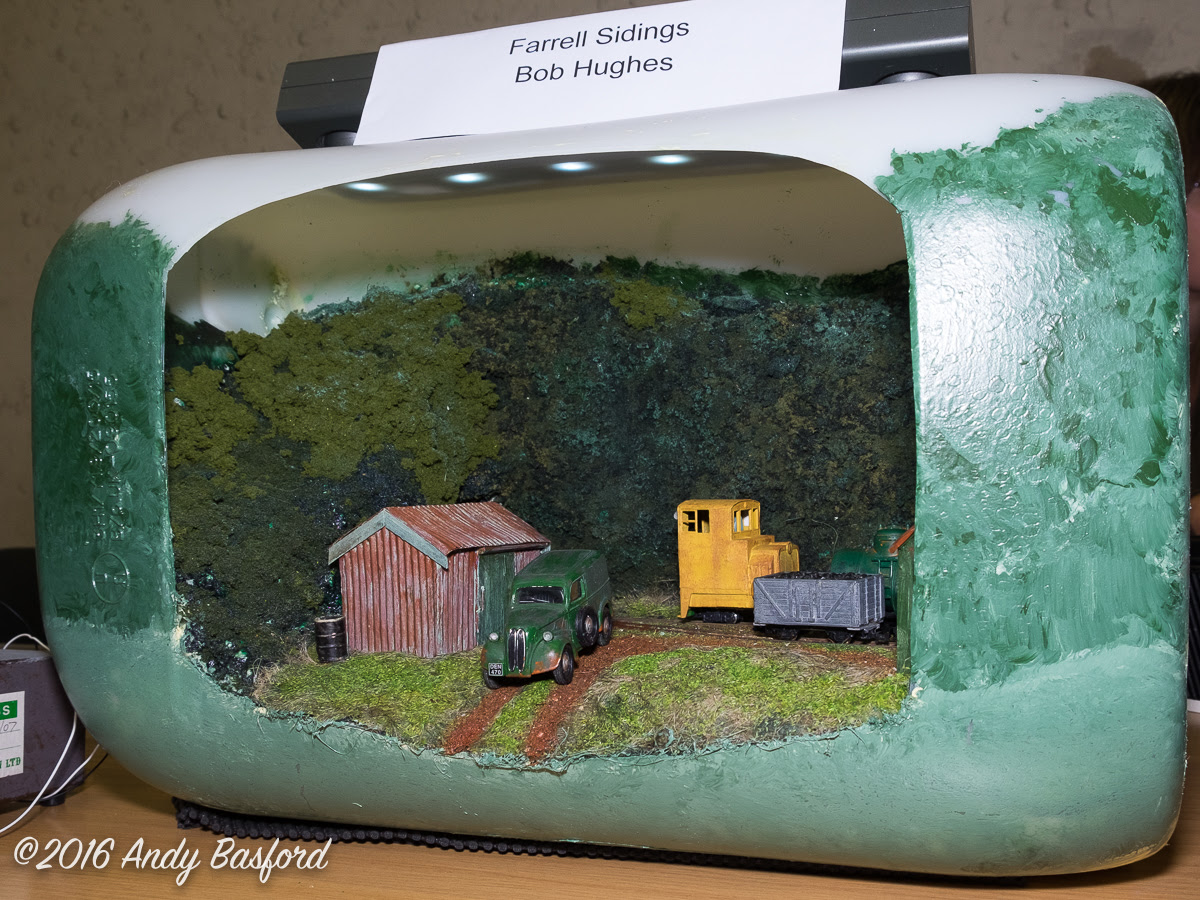 'Farrell Sidings' shows superb use of recycling, being built inside a discarded detergent container! Builder Bob Hughes is a serial builder of interesting micro layouts and details of many of them can be found on his blog Playing Trains

Bob also had this with him… 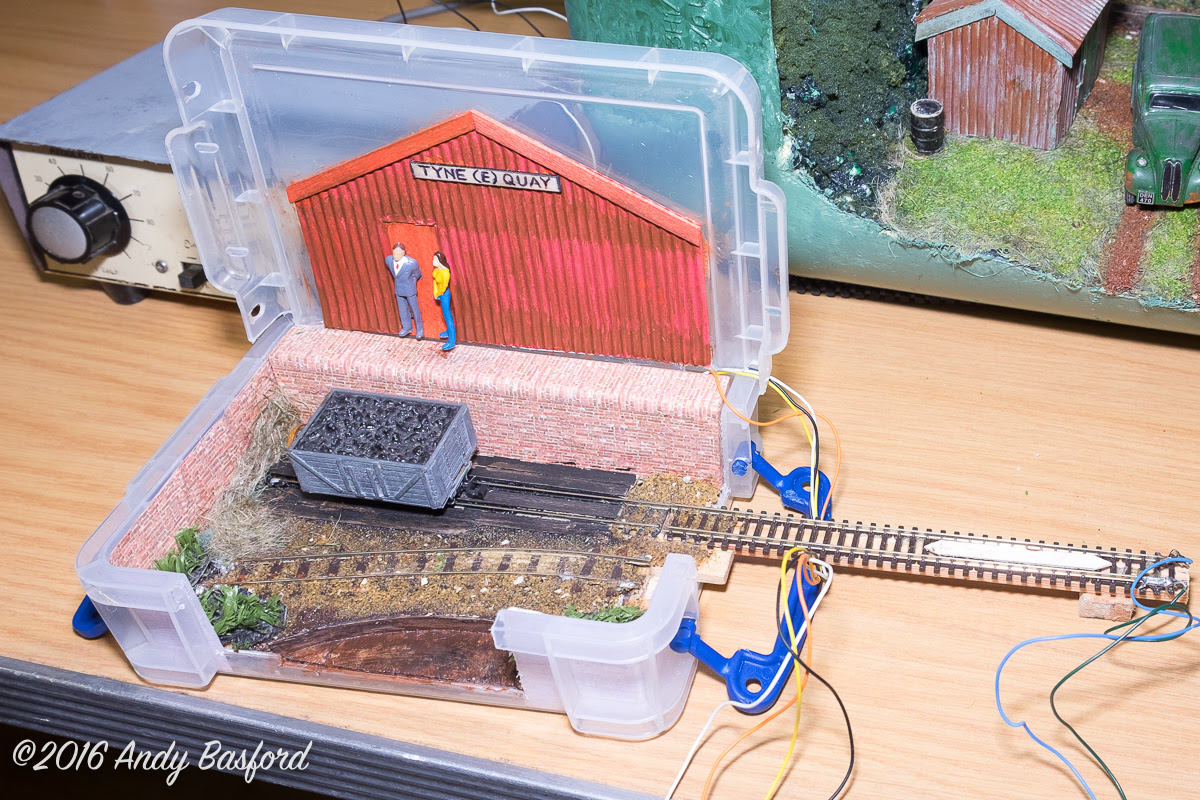 Surely the ultimate in portable layouts!

'La Briqueterie' by fellow SNCF Society member Tim Hills was inspired by Julian Andrews' 'United Brick and Clay Co' layout that featured in the Railway Modeller back in 1999. Coincidentally, that layout was on display a few feet away as part of Howard Martin's 'Avalon Line' trade stand.

The similarities are obvious! 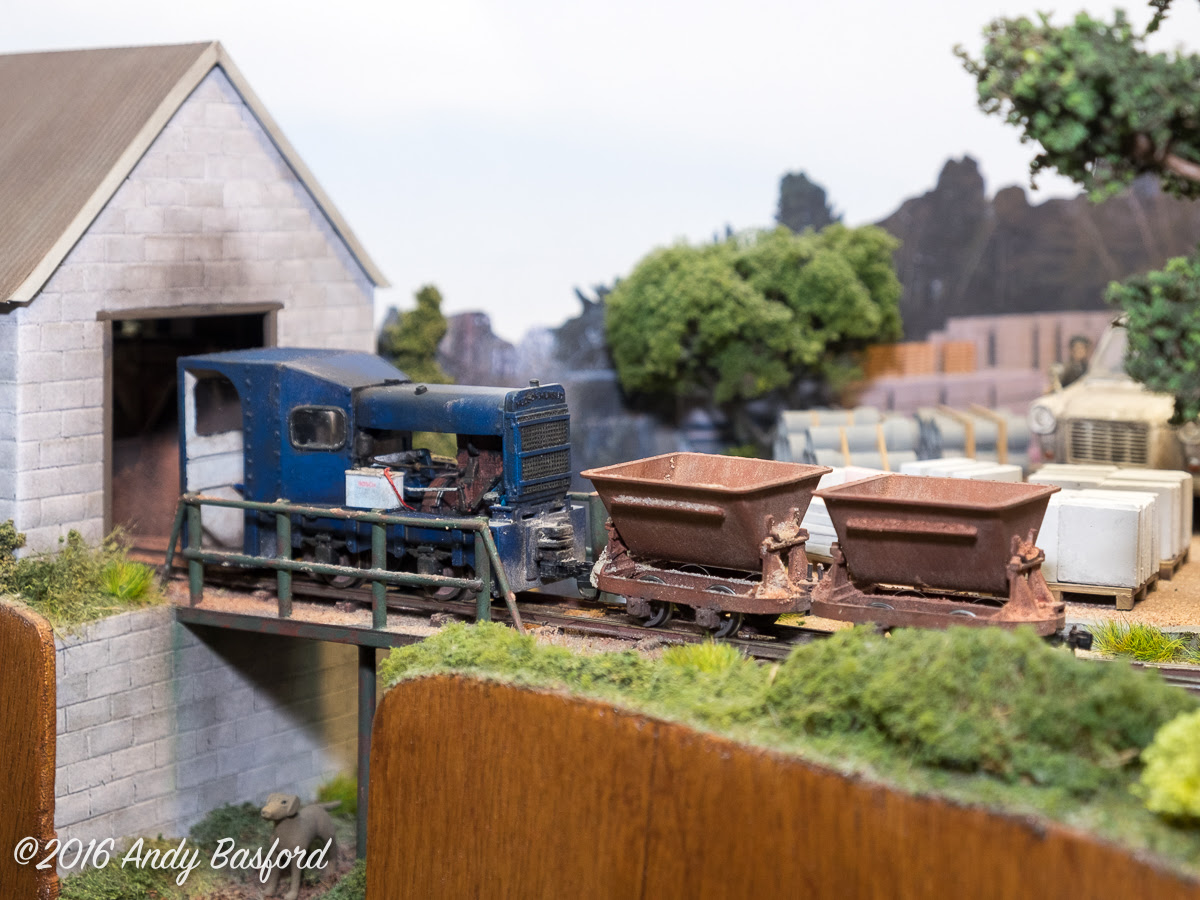 I'd been looking forward to seeing 'Thakeham Tiles' since hearing that the layout was standing in for Don and Val Sibley's 'Arenberg' which had sadly been withdrawn due to illness.

Michael had only very recently (on the Thursday prior to the show!) completed his model of one of the Thakeham Tiles' Hudson Hunslet locos and it was pottering back and forth with a couple of skip wagons. The skips appeared loaded on the right hand side of the layout and were emptied by an ingenious yet incredibly simple mechanism in the building on the left…

I should point out that there were far more layouts on display than I've mentioned here, these are just the ones that particularly interested me… An excellent variety of traders meant that I ticked off all the items on my shopping list too!

I've already put next year's show (on 28th October) in my diary! 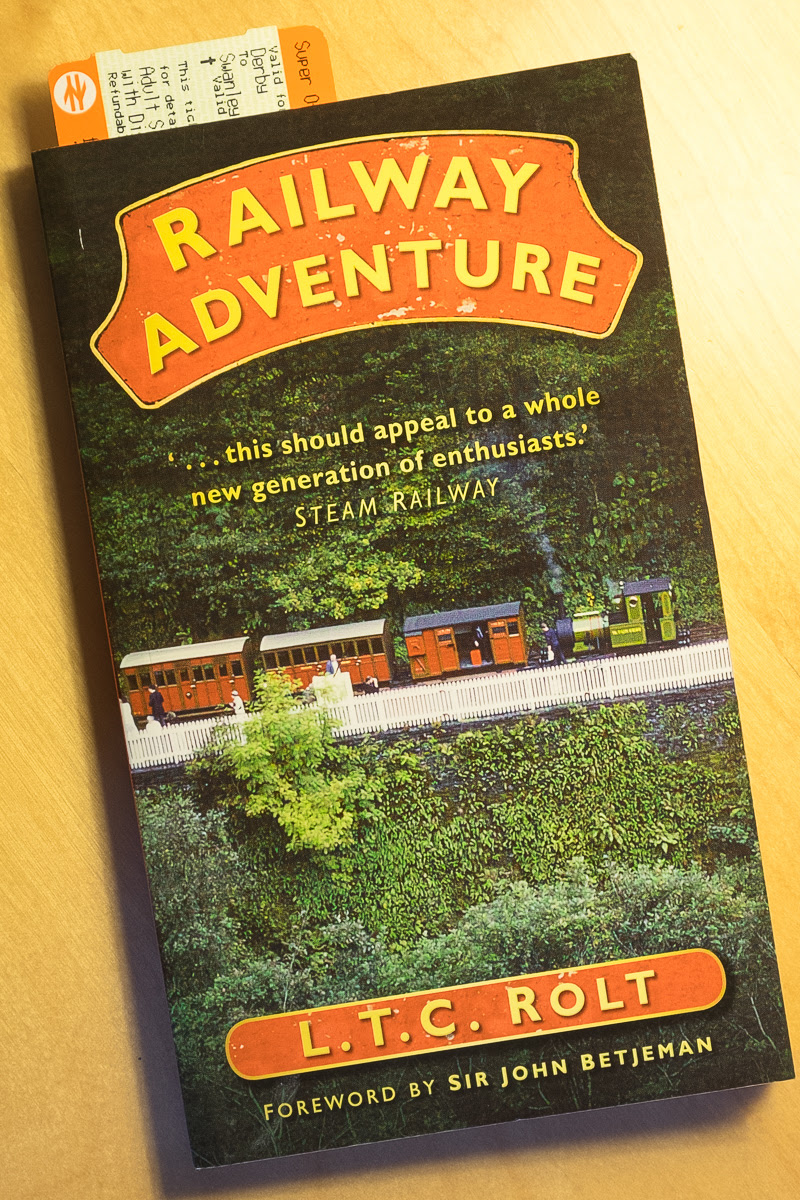 I suspect that most people reading this will be familiar with the book but just in case, I can do no better than to borrow the following quote from the website LTC Rolt, writer and engineer

"Railway Adventure is a very full and fair account of the first two years of the world's first successful take-over and restoration of a moribund railway by enthusiasts and volunteers. The main object of the book at the time was, of course, to help publicise and assist the Talyllyn Railway Preservation Society’s cause. In this it succeeded…"

Although e-books are increasing in popularity I still prefer print for many reasons, not least that you can use an old railway ticket as a bookmark! (I noticed recently that Mrs. B is currently using an old Paris Metro ticket in that very fashion…)

Also on my beside table is something I picked up yesterday for the princely sum of £1 from The OO9 Society Members Sales and Recycling Stand. 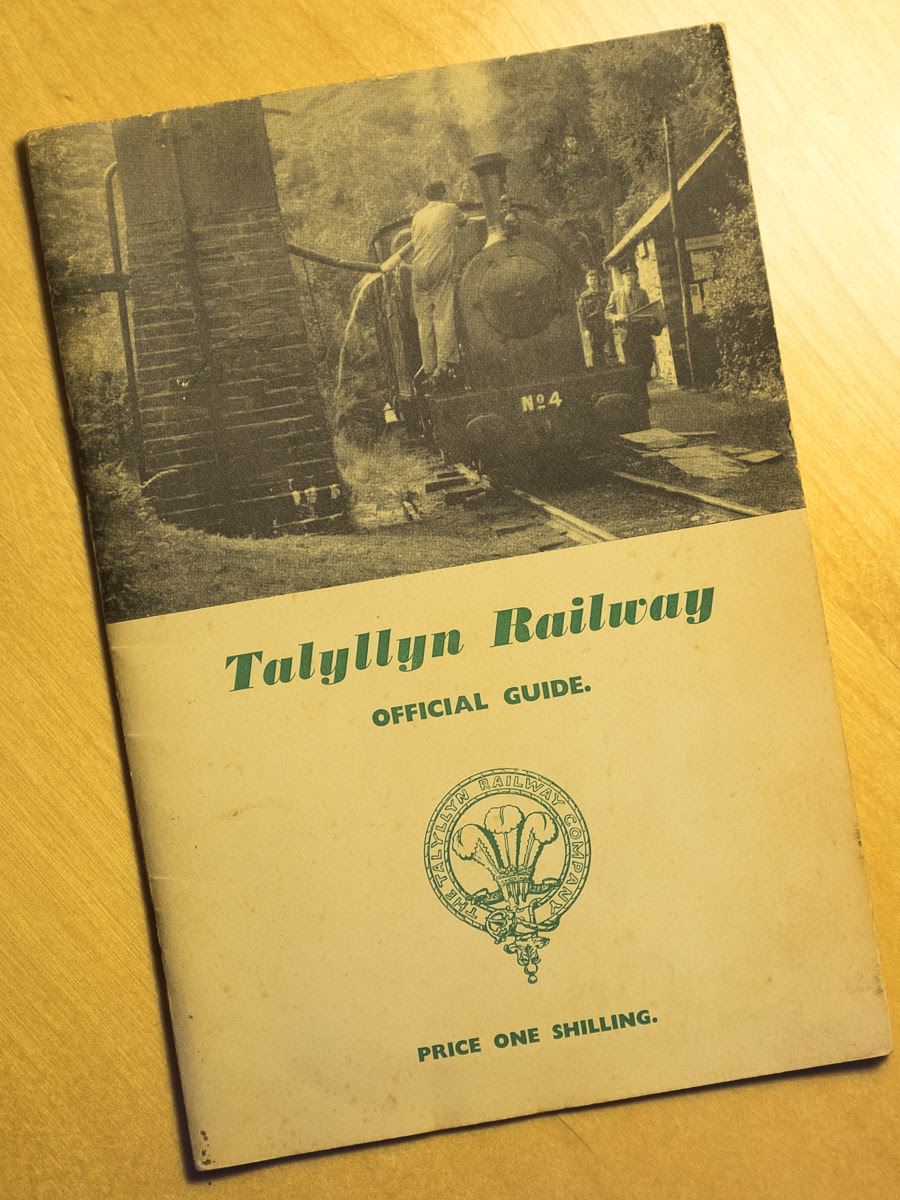 There's no obvious date on it but I'm guessing late 1950s…

I'm particularly looking forward to seeing Michael Campbell's Thakeham Tiles layout in the flesh (as it were).